With the PlayStation 4 and Xbox One on the horizon, Nintendo has to break out the big guns if they want the Wii-U to survive the next generation. Part of their artillery includes the upcoming Super Smash Bros. game. Knowing that there is a new Smash Bros. game in the works always leads to conversations and theory-crafting pertaining to who should, or should not, be included. Today, we look at the most logical choices for Nintendo to add to their roster of fighters.

Though adding in Chrom would seem to be an overdose of Fire Emblem alumni, we feel that his addition, and perhaps axing one of the previous characters, would help consolidate the roster and help modernize it.

While we don't even know its official name yet, we know that this evolved form of Mewtwo looks badass enough to fight a Super Saiyan. This form could perhaps be a new character, a new version of Mewtwo's Final Smash, or even replace Mewtwo entirely. Watch out, Krillin!

In theory, Paper Mario should be able to play quite differently than his regular form, using his paper-thinness to his advantage. We could imagine him turning into a paper airplane to further his jumps, or even getting assistance from his Pixl allies. Let'sa go!

Ghirahim is probably at the top of our list of favorite Zelda bosses that don't morph into giant pigs, so it's only natural that we'd want him on the Smash Bros. roster. Just as long as we don't have to see him lick his sword again..

We would love to play as all of Bowser's nefarious offspring - that's right, ALL of them. We imagine having two or three out at a time, similar to the Ice Climbers. The Koopalings would have the ability to switch out like the Pokemon Trainer, with each set of kids utilizing different attacks.

This would be the most effective way to set the brothers apart in the Smash arena. With the Poltergust, Luigi would be able to pull enemies in, swallow them up (similar to Yoshi), push them away, and use his flashlight to stun enemies. Who ya gonna call?

Besides Bowser and Ganon, the ruler of the Kremlings is one of the most prominent recurring villains in Nintendo history, so including him would be a logical choice. K. Rool could also utilize a mixture of the diabolical weapons he had while henching under the aliases of Baron K. Roolenstein, an evil scientist, and Kaptain K. Rool, a maniacal, blunderbuss-wielding pirate. 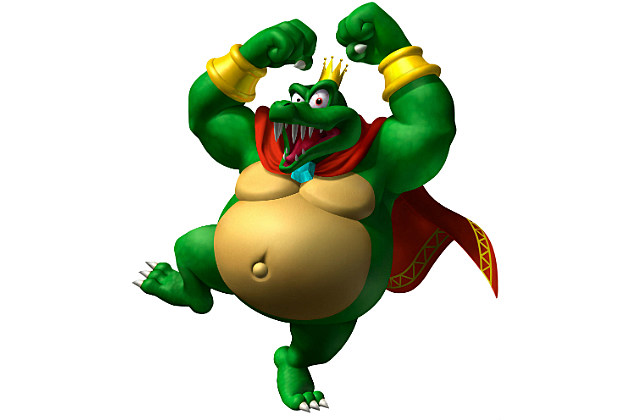 While Little Mac from the Punch Out!! series seems to be a cult favorite for the next Smash game, Knuckles is a more logical choice for those hoping for a boxer-like character. While he is privy to using his fists, Knuckles could also dig to avoid attacks, roll into a ball, or glide through the air. His inclusion might also raise echidna awareness!

At first glance, it seems that the only attack Birdo would have would be the ability to spit eggs; but people forget that he (or she?) also appeared in Mario Tennis, the Mario Kart Series, and Super Mario Strikers. With this sporty history, we feel that Birdo could have other special attacks, such as charging in with her go-kart, similar to Wario's motorcycle attack.

We know what some of you are thinking, "isn't Bayonetta a third party property?" Well, it was actually published by Sega, and guess who owns the licensing rights? Bayonetta 2's exclusivity to the Wii U makes her appearance in the next Smash Bros. more likely. And her ability to change her hair into demons and various weapons would lead to an endless amount of possible attacks in the Smash Bros.' arena.

next: the 10 stages of dark souls grief
Categories: Lists
Comments
Leave A Comment
Back To Top
Most Modern Games Could Benefit From Special Photo Modes