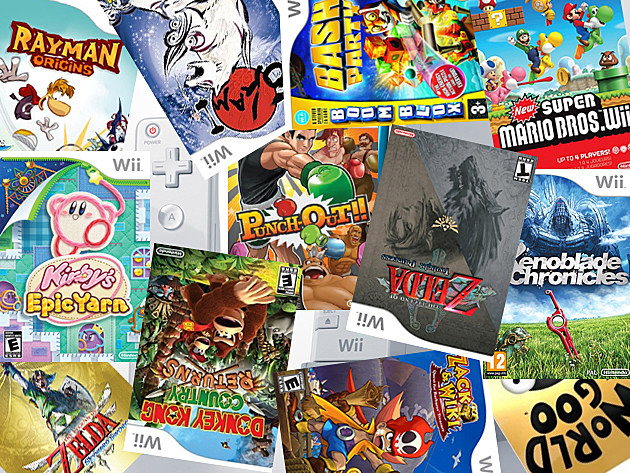 Nintendo
If there's one thing Wii games prove time and time again, it's that gameplay and cleverness wins out over fancy-shmancy graphics. NSMBW may not be powered by cutting edge technology, but it is a beautifully bright playing experience. It takes the formula established by Super Mario World/New Super Mario Bros and multiplies it. There are more levels, more secrets, and up to four players can play at a time. What could have easily been an exercise in frustration becomes a kind of multiplayer meta-game unto itself. Sure, you and your teammates can work together to reach the end of a level, but it's just as much fun to screw each other over at the worst possible moment. Maybe by throwing player two into a lava geyser, or by vaulting off of player 4 to reach a new area and sending her tumbling into nothingness.

Nicalis
Speaking of Metroidvania, Cave Story combines exploration, sci-fi weaponry, cuteness, and caves all into one downloadable package. Though the game can be a bit vague about what it wants you to do to progress, the core gameplay is so much fun it's hard to care. The game has an aesthetic straight from a high quality Sega Genesis game, with pulsating chiptunes that will haunt your earholes for hours after you're done playing.

Capcom
Few games have the kind of eyeball melting beauty that Okami brings to the screen. As Amaterasu, goddess of the sun/nature/sugar/spice, you travel the land repelling darkness and bringing things back into balance. The game utilizes a graphical style reminiscent of ancient Japanese painting techniques, which is fitting given that Amaterasu's primary weapon is a super-powered brush. This is another game that'll keep you coming back for more. Its primary quest is a lengthy one, and there are numerous sidequests and treasures to complete and collect.

Ubisoft
Taking a break from dealing with the antics of the Raving Rabbids, Rayman came out with a platforming adventure, one with a delicious multiplayer element. The game plays similarly to New Super Mario Bros Wii, with the most immediately striking difference being the beautiful graphics that look like they were drawn right into your television screen. Like most platformers, Rayman Origins is replete with plenty of collectibles and replay value to encourage you to put many hours into it.

Nintendo
Critics are a cantankerous bunch. They spend hours playing through games, good and bad, often growing tired of so many lackluster clones of popular games. So, knowing this, it makes Xenoblade Chronicles near-universal acclaim all the more impressive. An RPG released for a system not exactly known for them, XC combines elements of real-time combat, MMO-style enemy hate management, and time manipulation, wrapping them all up in a unique, well-written story.

Nintendo
We've piled a bit of praise onto Wii Sports already, but let's pile just a little bit more. This was to the Wii what Super Mario World was to the Super Nintendo: a pre-packaged game so fun and imaginative it helped sell entire systems. Never before had motion controls been done so well in a game, and, combined with Wii Sports whimsical graphics and ease-of-play, it was clear that Nintendo had a winner on its hands. Though Nintendo released several other games in the vein of Wii Sports, none managed to capture the magic of the original in quite the same way.

Capcom
RE 4 is often considered one of the best games of all time, and porting it to the Wii seemed like a natural move. The Wii's motion based controller really makes you feel like you're aiming a gun at whatever mutated, diseased creature is trying to chew your head off. Plus, the Wii version comes complete with the extra content not available on the original Gamecube version, which is a nice added value for anyone looking to try the game out for the first time or replay it for the hundredth.

Nintendo
When the Metroid series announced that it was moving to a first person perspective, rather than the traditional 2D gameplay it was famous for, fans scoffed. "You're ruining the game!" they said. "Epic fail of a reboot!" they cried. But when Metroid Prime came out, the fanboy tears dried up and they found that, hey, this is a really good game. Two sequels, and one system, later we got Metroid Prime 3: Corruption on the Wii. The motion controls in MP3:C just feel right. Aiming with one hand and swinging your other to grapple Samus across deadly lava pits feels like the way Metroid was always meant to be played.

Nintendo/2D Boy
Ask anyone who has played World of Goo and they'll tell you that, beneath the addictive, physics-based puzzle gameplay is a memorable, often haunting, story and world. Themes of loneliness and greed permeate World of Goo, but the game never beats you over the head with them. In addition to being just a fun game, WoG is a great piece to cite when arguing for video games as art, rather than purely entertainment. It's unique, evocative, and sticks with you long after you're finished with it.

Nintendo
No items. Fox only. Final Destination. Smash Bros fans have come to expect high quality from the series thanks to the amazing Super Smash Bros Melee, and when Brawl came onto the scene, those expectations were not only met, they were surpassed. Sure, purists may argue that Melee is a better game for, "competitive players," but trying to tune the Smash Bros series for competitive play is like trying to jam a round peg into a square hole. Smash Bros is a game about having unbelievable, chaotic fun with your friends, and Brawl unquestionably delivers. There are countless levels, items, and characters to play around with, including more than a few cameo characters who will bring a nostalgic tear to the eye of any '90s gamer.